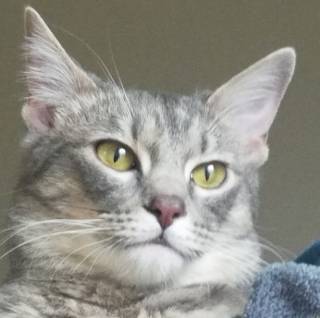 We adopted Clementine last October and wanted to send an update! She is a princess, a cuddlebug, a diva, and a menace. She gets intense zoomies and imitates our dog in everything she does, but her real goal is to get as close as possible to the king of the household: our cat Miel. As is ours :). We feel she is a real example of how much kitties' personalities flourish when they're adopted; we're amazed at her growth each day, and she makes us laugh endlessly. Thanks for taking care of her when she was there! 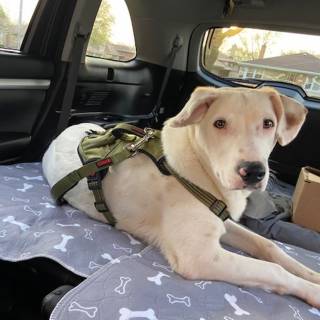 Wanted to share a update on Alfredo. He is adjusting nicely and already understands many commands. He is very smart and loves to go for hikes. He goes with me everywhere. He is a wonderful addition to the family!!

Bubba (Fluffy) and Leo (Mister Cat) are adjusting very well and doing great. They seem very happy in their new family and it makes me so glad :)

On July 26, 2020 we adopted our good boy Newt from you guys. We love our boy and he has a great life. This past spring we decided to move back to Canada and Newt has been having fun on the adventure. He loves hiking but isn’t too sure about swimming yet…. Water seems to be a mysterious liquid that he’s not sure about. And he is now an off leash doggo in the yard. He loves to chase the different birds off the deck and cuddle and play with my niece. He has done well with his training and he was able to be the Ring Bearer in our wedding this fall.

Thank you guys for everything you did for him.

I adopted ‘Toast’ a little over a week ago, and he settled in almost immediately! I decided to call him ‘Finch’, for his love of feathers. He is well over his discomfort with hands and has turned into quite the snuggler. He loves belly rubs, naps on and under the bed, watching TV, and watching the toilet flush, and beef wet food is his favorite! I’ve attached some pictures and videos for your staff and volunteers. Thanks so much for helping this boy find me!

We want to thank your organization for all that you do for the animals. We recently adopted Rocket, a Siberian Husky, and he is so special to us! He has been perfect! He is adapting well to his new home and is bonding with his dog brother Sam. The staff at your organization exceeded all expectations for us as first time adopters, and the service and attention we received was beyond amazing! Thank you for everything!

I want to share with the Humane Society this picture of our recently adopted kitten, Nutter Butter fitting into our family. He and our dog Cooper are fast friends! Go figure.

I took Griswold (formerly Lin Manuel Purranda) to college with me as I am living in a pet friendly apartment. I will say he is truly living his best life. He is the sweetest and most handsome boy there is. Grizzy is very, and I mean VERY vocal. He will tell me exactly how he feels. He also meows when he is running and jumping off my bed or counter, so silly! With his meowing, he also loves attention. I always wake up to him snuggling with me and he will even let me know in his own way when he wants to sit on my lap on the couch. He will also touch my face with his paws when he wants to be fed or when he is trying to get my attention. I included a picture of that! Though his paws have been in the litter box, I think it's so funny and cute. Grizzy is very open and friendly to everyone, and people can get on his good side by giving him scratchies.

Grizzy's favorite spot is his window perch. He gets to watch the birds fly and can sunbathe. He also loves his rainbow cat cave, he will 'fight' my other cat for it! Some of Grizzy's favorite toys are chirpy toys that make noise, he also likes toys with strings. He is also an avid scratcher. Griz absolutely loves to scratch his scratch board and honestly makes my life easier when I don't need to trim his nails. He is also obsessed with bags. He will climb into any bag and especially loves to take naps in my duffel bag when it's out. He even likes to 'hide' from me and play. He will do his best hiding behind some box (even though I can clearly see him) and then when I walk by, he jumps out and runs like crazy.

Griz is still a pretty big boy, weighing 15 pounds. I actually did a cat DNA test on him and found out he's mostly Maine Coon, American Shorthair and Ragdoll. He definitely has a lot of the Maine Coon's personality and I think that's why he's a little bit larger.

Overall, Griswold is a very good boy and I just want to buy him everything!! I included some pictures of him :)

I just wanted to send you an update on one of my kitties that I adopted from Hinsdale Humane Society 18 years ago. This adorable little guy, formerly known as Rev, now my sweet loving Romeo, is celebrating his 19th birthday tomorrow! He has been the most amazing kitty, a good will ambassador for his multiple kitty brothers, a bunny brother and a puppy sister! He has outlived 2 kitties, and the bunny, but still has one brother and a puppy sister that he lives with. He is in good health for a 19 year old and I hope to have him for awhile longer. We now live in North Carolina, but will always be grateful to  the family who surrendered him and to your organization for adopting him to my family.

Congratulations to our Dog DNA Winner Helen Bernotas and her dog Tilly! It turns out Tilly is 50% Husky, 37.5% German Shepard, 12.5% Australian Cattle Dog, and 100% adorable.

Here’s what Helen had to say:

We’ve had Tilly  since November and could not be more thrilled with her. She is super smart. She goes for three walks a day and loves hikes in the forest preserves. She loves car rides. She lets us know when it’s time to be fed or walked, I think she can tell time. We’re so fortunate to have found her at Hinsdale Humane Society.