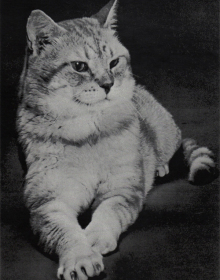 It is the quintessential American success story… a gentleman down on his luck, who achieves fame and fortune through hard work and ingenuity. In this case, the gentleman happens to be Morris, the most recognizable cat in the world. And Hinsdale Humane Society was the launching post of his career.

Morris, previously named Lucky, was adopted in 1968. As the story goes, HHS staff members noticed the cat’s charming personality and contacted Bob Martwick, a professional animal trainer who worked for the Leo Burnett advertising agency. Martwick recognized a certain charisma and star quality. When Morris went to the casting call for the 9Lives commercial, “He jumped on the table… and he walked right up to the art director, the big cheese, and bumped him in the head. And then Morris just sat back,” Martwick said in 1995. “The art director said, ‘This is the Clark Gable of cats.’”

From 1969-1978, Morris completed 58 commercials, with the sardonic voice-over of John Erwin, creating one of the most successful and memorable advertising campaigns in television history. More than 30 years later, Morris is still remembered fondly. 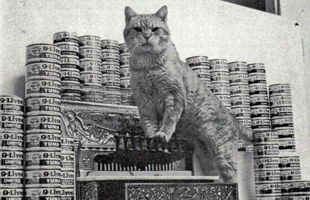 All this fame and fortune didn’t go to Morris’ head. He visited local elementary schools for Be Kind to Animals Week and allowed hundreds of children to pet him affectionately. Morris received so much fan mail, he had his own personal secretary. He received marriage proposals from felines and humans alike. He starred in the movie “Shamus” with Burt Reynolds and Dyan Cannon, and won the PATSY, the animal equivalent of the Oscar award in 1972 and 1973. Morris personally “wrote” three books, and was the subject of another, “Morris: An Intimate Biography” published in 1974. He reportedly was the prototype for Garfield the cat, also a big orange cat with an attitude, created by artist Jim Davis.

Morris was a media darling. He was named “Animal Star of the Year” by US magazine. He hosted “Morris’ Salute to American Pets” a primetime television special that shines the spotlight on amazing and heroic pets. He appeared on “Good Morning America,” “Lifestyles of the Rich and Famous,” and “The Oprah Winfrey Show.”

Upon his death in July of 1978, Morris’ obituary appeared in newspapers worldwide.

Subsequent Morris actors were all rescued from shelters. Del Monte Foods, the manufacturer of the 9Lives brand, has used Morris’ fame to bring awareness to the plight of cats and kittens in animal shelters.

“9Lives believes that every cat deserves a forever home,” said Noree Lieginger, brand manager, 9Lives. “We are so proud of the Morris’ Million Cat Rescue campaign, which successfully placed one million cats in new homes and helped educate the public on the importance of cat rescue. With Morris having such strong ties to the Hinsdale Humane Society, we owe a large thanks to the organization for their contributions to the campaign’s success.” According to a 2007 Del Monte press release, “Despite all his accomplishments, it is important to mention that Morris never forgot where he came from.” From a stray cat on the streets of Hinsdale, to world-wide fame, this is a cat that lived each of his nine lives to the fullest!